Rivka (Rebecca at the Well ) 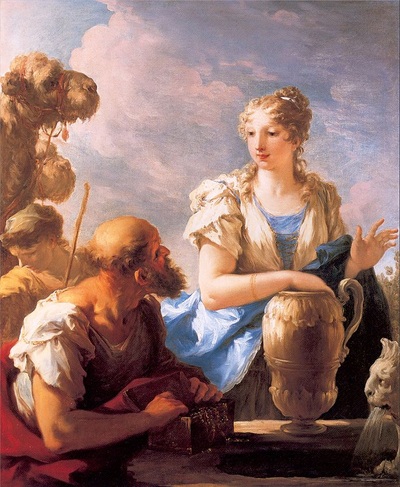 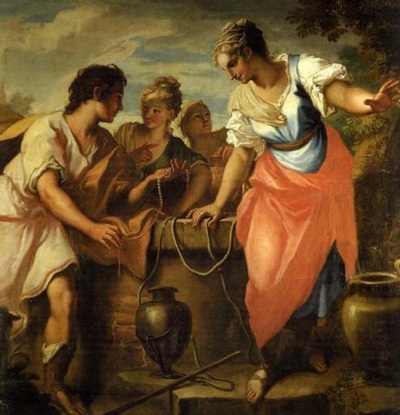 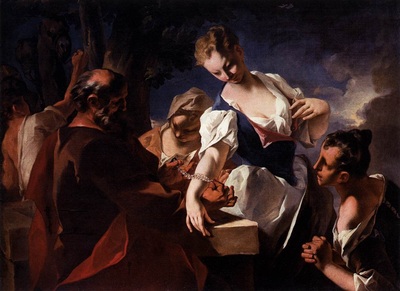 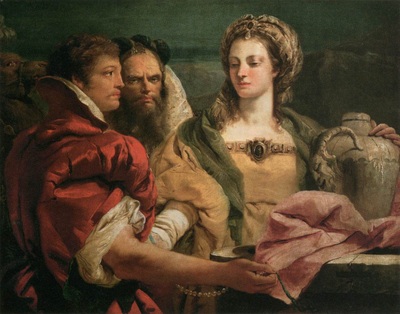 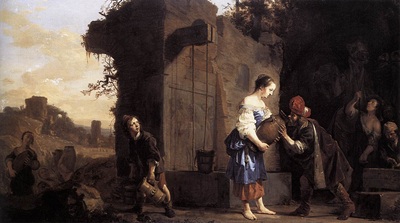 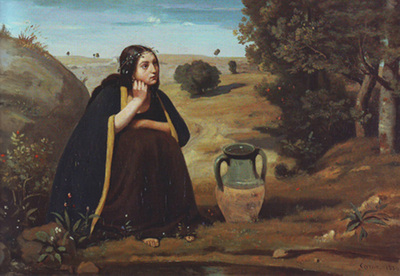 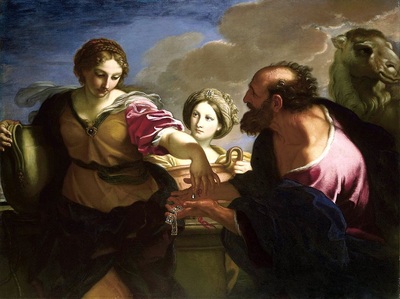 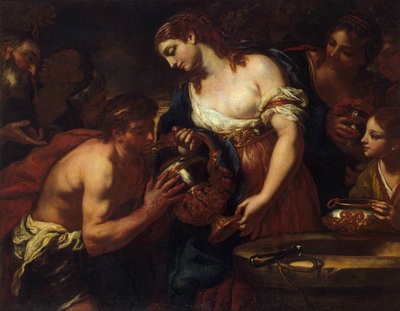 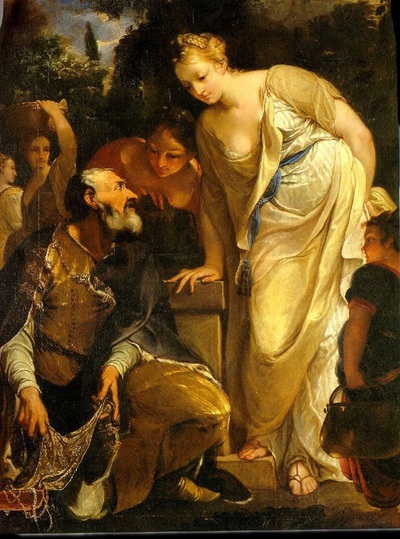 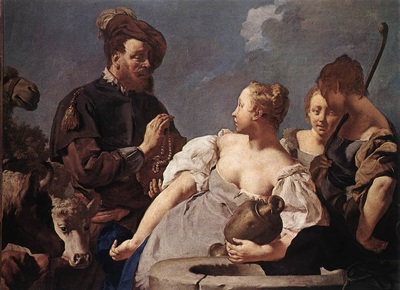 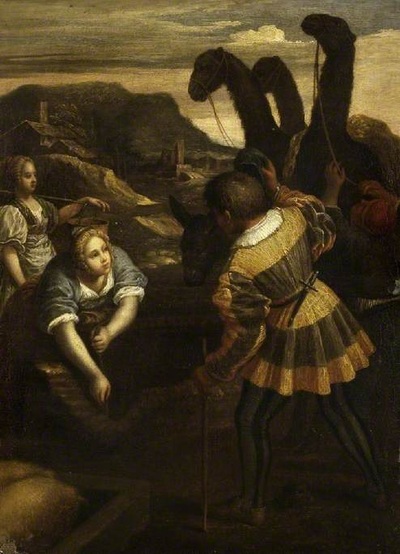 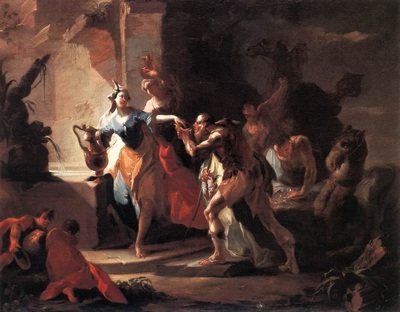 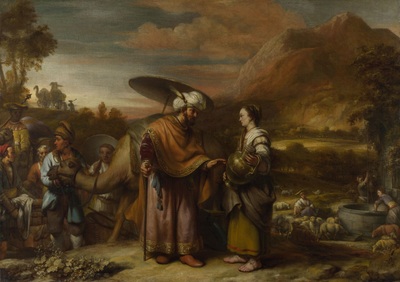 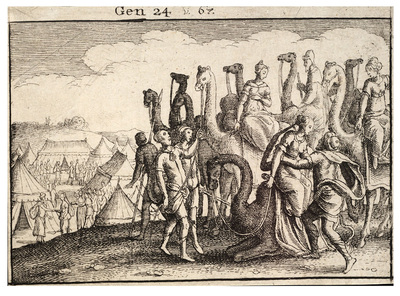 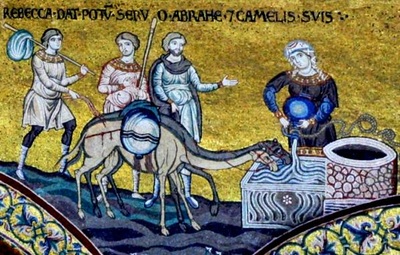 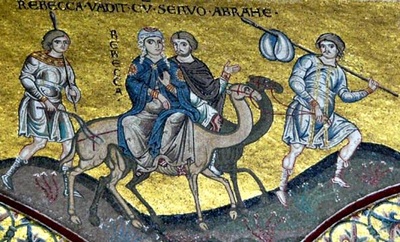 24 By now Avraham was old, advanced in years; and Adonai had blessed Avraham in everything.2 Avraham said to the servant who had served him the longest, who was in charge of all he owned, “Put your hand under my thigh; 3 because I want you to swear by Adonai, God of heaven and God of the earth, that you will not choose a wife for my son from among the women of the Kena‘ani, among whom I am living; 4 but that you will go to my homeland, to my kinsmen, to choose a wife for my son Yitz’chak.” 5 The servant replied, “Suppose the woman isn’t willing to follow me to this land. Must I then bring your son back to the land from which you came?” 6 Avraham said to him, “See to it that you don’t bring my son back there. 7 Adonai, the God of heaven — who took me away from my father’s house and away from the land I was born in, who spoke to me and swore to me, ‘I will give this land to your descendants’ — he will send his angel ahead of you; and you are to bring a wife for my son from there. 8 But if the woman is unwilling to follow you, then you are released from your obligation under my oath. Just don’t bring my son back there.” 9 The servant put his hand under the thigh of Avraham his master and swore to him concerning the matter.

(iii) 10 Then the servant took ten of his master’s camels and all kinds of gifts from his master, got up and went to Aram-Naharayim, to Nachor’s city. 11 Toward evening, when the women go out to draw water, he had the camels kneel down outside the city by the well. 12 He said, “Adonai, God of my master Avraham, please let me succeed today; and show your grace to my master Avraham. 13 Here I am, standing by the spring, as the daughters of the townsfolk come out to draw water. 14 I will say to one of the girls, ‘Please lower your jug, so that I can drink.’ If she answers, ‘Yes, drink; and I will water your camels as well,’ then let her be the one you intend for your servant Yitz’chak. This is how I will know that you have shown grace to my master.”

15 Before he had finished speaking, Rivkah the daughter of B’tu’el son of Milkah the wife of Nachor Avraham’s brother, came out with her jug on her shoulder. 16 The girl was very beautiful, a virgin, never having had sexual relations with any man. She went down to the spring, filled her jug and came up.17 The servant ran to meet her and said, “Please give me a sip of water from your jug to drink.”18 “Drink, my lord,” she replied, and immediately lowered her jug onto her arm and let him drink.19 When she was through letting him drink, she said, “I will also draw water for your camels until they have drunk their fill.” 20 She quickly emptied her jug into the trough, then ran again to the well to draw water, and kept on drawing water for all his camels. 21 The man gazed at her in silence, waiting to find out whether Adonai had made his trip successful or not.

22 When the camels were done drinking, the man took a gold nose-ring weighing one-fifth of an ounce and two gold bracelets weighing four ounces 23 and asked, “Whose daughter are you? Tell me, please. Is there room in your father’s house for us to spend the night?” 24 She answered, “I am the daughter of B’tu’el the son Milkah bore to Nachor,” 25 adding, “We have plenty of straw and fodder, and room for staying overnight.” 26 The man bowed his head and prostrated himself before Adonai. (iv)27 Then he said, “Blessed be Adonai, God of my master Avraham, who has not abandoned his faithful love for my master; because Adonai has guided me to the house of my master’s kinsmen.” 28 The girl ran off and told her mother’s household what had happened.

29-30 Rivkah had a brother named Lavan. When he saw the nose-ring, and the bracelets on his sister’s wrists besides, and when he heard his sister Rivkah’s report of what the man had said to her, he ran out to the spring and found the man standing there by the camels. 31 “Come on in,” he said, “you whom Adonai has blessed! Why are you standing outside when I have made room in the house and prepared a place for the camels?” 32 So the man went inside, and while the camels were being unloaded and provided straw and fodder, water was brought for him to wash his feet and the feet of the men with him.

33 But when a meal was set before him, he said, “I won’t eat until I say what I have to say.” Lavan said, “Speak.” 34 He said, “I am Avraham’s servant. 35 Adonai has greatly blessed my master, so that he has grown wealthy. He has given him flocks and herds, silver and gold, male and female slaves, camels and donkeys. 36 Sarah my master’s wife bore my master a son when she was old, and he has given him everything he has. 37 My master made me swear, saying, ‘You are not to choose a wife for my son from among the women of the Kena‘ani, among whom I am living; 38 rather, you are to go to my father’s house, to my kinsmen, to choose a wife for my son.’ 39 I said to my master, ‘Suppose the woman isn’t willing to follow me.’ 40 Avraham answered me, ‘Adonai, in whose presence I live, will send his angel with you to make your trip successful; and you are to pick a wife for my son from my kinsmen in my father’s house; 41 this will release you from your obligation under my oath. But if, when you come to my kinsmen, they refuse to give her to you, this too will release you from my oath.’

42 “So today, I came to the spring and said, ‘Adonai, God of my master Avraham, if you are causing my trip to succeed in its purpose, 43 then, here I am, standing by the spring. I will say to one of the girls coming out to draw water, “Let me have a sip of water from your jug.” 44 If she answers, “Yes, drink; and I will water your camels as well,” then let her be the woman you intend for my master’s son.’45 And even before I had finished speaking to my heart, there came Rivkah, going out with her jug on her shoulder; she went down to the spring and drew water. When I said to her, ‘Please let me have a drink,’ 46 she immediately lowered the jug from her shoulder and said, ‘Drink, and I will water your camels as well.’ So I drank, and she had the camels drink too.

47 “I asked her, ‘Whose daughter are you?’ and she answered, ‘The daughter of B’tu’el son of Nachor, whom Milkah bore to him.’ Then I put the ring on her nose and the bracelets on her wrists, 48 bowed my head, prostrated myself before Adonai and blessed Adonai, God of my master Avraham, for having led me in the right way to obtain my master’s brother’s [grand]daughter for his son.

49 “So now if you people intend to show grace and truth to my master, tell me. But if not, tell me, so that I can turn elsewhere.”

50 Lavan and B’tu’el replied, “Since this comes from Adonai, we can’t say anything to you either bad or good. 51 Rivkah is here in front of you; take her and go. Let her be your master’s son’s wife, as Adonaihas said.” 52 When Avraham’s servant heard what they said, he prostrated himself on the ground toAdonai. (v) 53 Then the servant brought out silver and gold jewelry, together with clothing, and gave them to Rivkah. He also gave valuable gifts to her brother and mother. 54 He and his men then ate and drank and stayed the night.

In the morning they got up; and he said, “Send me off to my master.” 55 Her brother and mother said, “Let the girl stay with us a few days, at least ten. After that, she will go.” 56 He answered them, “Don’t delay me, since Adonai has made my trip successful, but let me go back to my master.” 57 They said, “We will call the girl and see what she says.” 58 They called Rivkah and asked her, “Will you go with this man?” and she replied, “I will.”

59 So they sent their sister Rivkah away, with her nurse, Avraham’s servant and his men. 60 They blessed Rivkah with these words: “Our sister, may you be the mother of millions, and may your descendants possess the cities of those who hate them.” 61 Then Rivkah and her maids mounted the camels and followed the man. So the servant took Rivkah and went on his way.

62 Meanwhile, Yitz’chak, one evening after coming along the road from Be’er-Lachai-Ro’i — he was living in the Negev — 63 went out walking in the field; and as he looked up, he saw camels approaching. 64 Rivkah too looked up; and when she saw Yitz’chak, she quickly dismounted the camel. 65 She said to the servant, “Who is this man walking in the field to meet us?” When the servant replied, “It’s my master,” she took her veil and covered herself.

66 The servant told Yitz’chak everything he had done. 67 Then Yitz’chak brought her into his mother Sarah’s tent and took Rivkah, and she became his wife, and he loved her. Thus was Yitz’chak comforted for the loss of his mother.